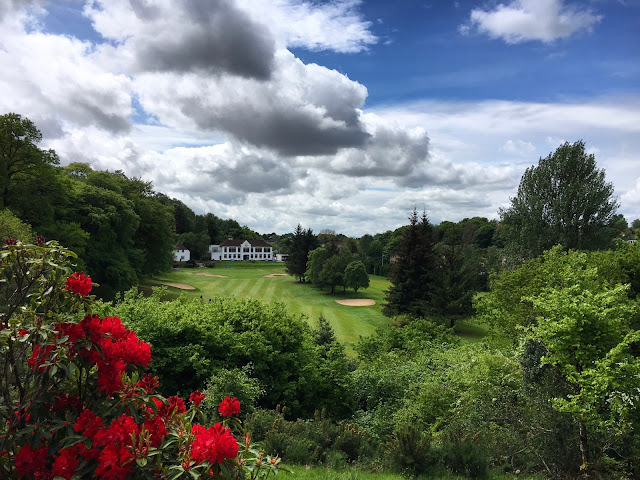 The West Vets Autumn Meeting is at Douglas Park Golf Club this year on 3rd September.

Entry on line is now available -- CLICK HERE or go to the Entry On line Page
Posted by Carol at Monday, May 28, 2018

As the sun broke through in the morning, the course at Renfrew GC looked quite stunning with a wonderful variety of trees lining the fairways.

The first Championship Semi-Final saw Liz Stewart (Greenburn) taken to the 18th hole by Liz Keohone (Loudon Gowf ) in what was an exciting tense game.


In the other Semi-Final, Joanne Sharp  (Kilmarnock Barassie) kept up with Lesley Lloyd (Hayston) in the early stages to be only 1 down after 9. However Lesley pulled away after the 10th to win 3 & 2.

The Championship Final saw Lesley Lloyd take an early lead and was 3 up after 9.
Liz Stewart, however fought back quickly to be only 1 down after 12, including a birdie 4 at the 11th. However Lesley kept her nerve to end the match on the 17th, winning by 3 & 1.

In the first Stewart Trophy Semi-Final, Pam Mather (Cowglen) and Morag Little (Whitecraigs) had an adventurous ding-dong battle, but unfortunately Morag played a wrong ball out of the trees on the 17th to lose 2 & 1.
In the other Semi-Final, the much travelled Janet Buchanan (Dalmally) had a great game with Brenda Conway (Renfrew) which went on to the 19th where Brenda emerged victorious – and very thirsty and hungry !

The final of the Stewart Handicap Trophy was then between Pam Mather and Brenda Conway.
Pam was up against it from early on, she won the first but Brenda then won the next three holes with long single putts.

The match continued this way with Brenda putting extremely well throughout and making it really difficult for Pam to win or half holes. The final result was 7 & 6 for Brenda.

Many thanks to the supporters who turned up to watch the play and the prize-giving.
We must also praise everyone at Renfrew GC, as they made us so welcome. The course was in great condition and the catering was excellent. We also have to thank Secretary Alec Hammil for his help and support over the 2 days.

PHOTOGRAPHS FROM THE WEST VETS CHAMPIONSHIP -- COURTESY OF JUNE LOCKHART

Good weather brings out the best in West Vets at Renfrew G.C.

Though chilly at first, the sun eventually shone and the challenging course at Renfrew was in very good condition, so all the competitors enjoyed their games.

Unfortunately illness during the journey caused Liz Wilson to withdraw, so Gillian Kyle spent part of her morning at Braehead for some retail therapy.  Liz Stewart prevailed 4 & 3 over May Hughes, though it was tight after the first 9 holes, and  Liz Keohone surged ahead of Janette McCartney on the back nine, winning 5 & 4.

Our Super Vet Morag Key took Lorraine Campbell to the 16th before losing 4 & 2, and adversaries of old Jennifer Mack and Janice Paterson, had a match of 2 halves – they were all square after 9 before Janice raced ahead winning 5 & 3.  The most exciting morning match was won by Joanne Sharp after Anabel Kane (6 down after 9) pushed Joanne to the 17th green, where she won 3 & 1.  Carol Fell and Lesley Lloyd played another tight match for the first 9 holes, then Lesley took control in the back 9, eventually winning 4 & 3.  The only match which went the distance in this round was between Roz Purdom and Lynn McColl, with Roz emerging victorious.

The first afternoon match saw Gillian Kyle take an early 2 hole lead but Liz Stewart quickly drew level and kept her nose in front, eventually winning 4 & 3.  Liz Keohone and Lorraine Campbell fought a close match with Liz edging it by 2 holes, and Lesley Lloyd played very steadily to hold off Roz Purdom by 4 & 2.  Player of the day has to be Joanne Sharp who played a total of 37 holes, winning the afternoon match after 20 holes over a gallant Janice Paterson.

Report and photos by June Lockhart 
WHAT A DIFFERENCE A MONTH MAKES !!

92 West Vets put recent horrible weather behind them and took part in the Summer Meeting and Championship Qualifier at Troon Portland in wonderful conditions. Viewing Arran in the background and enjoying good company made those, like myself, forget about the bad scores whilst others revelled in the conditions to produce excellent scores.

Congratulations go to overall winner Alex Glennie (pictured right) with a superb nett 70 (bih), beating Gillian Kyle also with a nett 70, but who had an amazing gross score of 72.

Special mention must be made of Morag Key (Ralston) who was 3rd overall with a nett 74, but was certainly the Super Vet of the day.  There must be something in the Paisley water !


The Summer Meeting was also the qualifier for the West Vets Championship and Stewart Cup (Handicap) Trophy which takes place next week on Tuesday 22nd May and Thursday 24th May at Renfrew Golf Club.

Championship Draw 1st round (Tuesday) 22nd May (am)

The Committee would like to thank the Ladies of Troon Portland for allowing us the use of their course, and for making us feel so welcome.  The catering staff were also first class for both food and service, and the course, though challenging, was in excellent condition.

Finally many thanks go to Sandra Macdougall for all her hard work in the lead up to the event and on the day, admirably aided by Chris Fowler and May Hughes.  Thanks also go to Chris and Mary Wylie for their efforts in purchasing our new gilets - VETS WITH STYLE !!

Some photos from the day

Report and photos by  June Lockhart 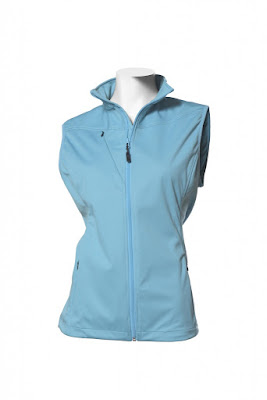 Murraygolf have been in touch and the Gilets are now ready and I will be collecting them on Tuesday, so they will be available to purchase at the meeting at Troon on Wednesday.

As a reminder, they are £35 and come in the approximate sizes:

Congratulations are due to the following members for being chosen to play for the West Vets in June.

The team to play East Vets for the Elise Duncan Trophy at Kilmacolm on Tuesday 19th June is as follows :

For all players, please meet for 11 am with 1st tee time being 12 noon.

The team to play Midlands Vets for the Mid West Trophy at Cochrane Castle on Thursday 7 th June ( for handicaps 10 and above ) is as follows :

For all players, please meet for 11 am with 1st tee time being 12 noon.

Ladies are welcome to come along and support, and we wish both teams the very best of luck.