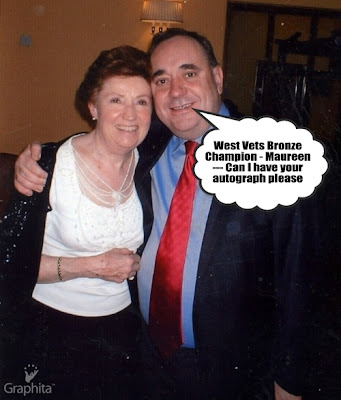 The 1st Minister Alex Salmond was delighted to meet our Bronze West Vets Champion Maureen Rennie (Douglas Park) recently in Boat of Garton. In fact he wanted to get Maureen's autograph as he had never met a good golfer before !!
Click on the picture above to get an enlargement
Posted by Carol at Saturday, November 10, 2007 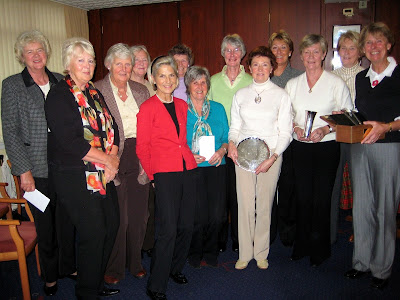 Fifty two ladies attended the 39th AGM of the West Vets at Cowglen Golf Club today.
Captain Pat Walker reported on a fine year for the Division. Good Meetings were held at West Kilbride ,Clydebank and Strathaven and some excellent scores were recorded.
The Divisional Championship was again won by Helen Faulds of Douglas Park with the Bronze Salver going to Maureen Rennie also of Douglas Park.
Our three matches against other Divisions were fought valiantly and resulted in one victory and two defeats.
Pat Hutton newly retired Captain of the Scottish vets team reported on the Jamboree at Royal Cromer and Helen Faulds gave an account of the Scottish Match against Ireland at Southerness. Helen played in both these events.
Pat thanked the Committee for their support throughout the year and welcomed Sheila Shaw and Moira McCartney who will replace Sandra Gilchrist and Maureen Herbert.
The Meeting concluded with the Prizegiving
Prizewinners 2007
Championship: Helen Faulds ( Douglas Park) Silver Vase
Runner Up: Jennifer Mack ( Haggs Castle )
Bronze Salver: Maureen Rennie ( Douglas Park )
Runner Up: Mary Irving ( Ranfurly Castle )