The semi finals and final of the 2016 West Vets Championship was played today in a very cold but a mainly dry day (until the last 3 holes of the Stewart Cup) at Renfrew Golf Club.
Carol Whyte ( Milngavie ) had a very close match with Alex Glennie (Kilmarnock Barassie ) with Carol winning 2 & 1.
Anabel Kane ( Kilmacolm ) again had a very exciting match - this time against Gillian Kyle ( East Renfrewshire ) with players needing birdies to win holes. Gillian eventually triumphed 3&2.

In the afternoon final Carol Whyte got off to an excellent start and was 2 up after 3 holes but Gillian fought back and was 2 up by the turn. Carol then won the 11th hole to be only 1 down but Gillian upped her game and went on to win 3&2.
Referee - West Vets Captain Marion Stewart  was tiring after the first 6 holes and nearly developed tennis elbow as the players were taking it in turns to be in bunkers!

Well done to Gillian who wins the Championship for the first time and goes forward to play at Blairgowrie to play in the S.V.L.G.A. Championship.

In the Stewart Cup (Handicap Trophy)  -- Lynn McColl (Bearsden) and Fiona Roger (Ranfurly Castle) contested the final in a most sporting manner. Having gained the initiative early on, Lynn was ahead throughout most of the match, but on 5 occasions Fiona pulled it back to all square.
However Fiona snatched victory on the 19th with a very good par 4, but both deserve credit for a well fought match.


Thanks go to Renfrew Golf Club for allowing us to host the Championship- they were very welcoming particularly the volunteer gardeners ( all life members of Renfrew G.C.) who had made the gardens around the clubhouse look like the Chelsea Flower Show.
Thanks also go to Morag Key for all the photographs, to Vice Captain June Lockhart for refereeing the Stewart Cup and to all the spectators who braved the cold winds to support the players.

WELL DONE EVERYONE AND CONGRATULATIONS FROM YOUR EVER DEDICATED FELLOW REPORTER IN DOWNTOWN TORONTO !!
Posted by Carol at Thursday, May 26, 2016

It was a beautifully sunny day at Renfrew Golf Club and there was some very good golf played and the scores did not reflect that in many of the games.


Anabel Kane (Kilmacolm) was the surprise player of the day. She won in the 1st round against Ayrshire County Team member Roz Purdom (Prestwick St Nicholas)  and then played fabulous golf in the afternoon quarter final against defending champion Lesley Lloyd (Hayston) .
It was a fantastic game which ended on the 18th green. Lesley was in bunker at the 18th green in two and Anabel was just short of bunker. Anabel chipped on to about 10 feet above the hole. Lesley pitched out of bunker to about 15-20 feet past and level with the hole. Lesley then slotted it in for a par and Anabel who was 1 up after 17th then had to hole a downhill twisty putt to win the game.
West Vet's Treasurer Mo Neilson and past Secretary Morag Key couldn't watch but just heard it drop in!! -- What a fantastic game they both said. -- Thanks go to Morag for all the info .
The 2015 West Vets Champion Lesley accepted her defeat graciously and congratulated Anabel on her win.

Thursday promises to be another lovely day and all today's winners looking forward to doing battle again!

From your roving reporter Carol in Downtown Toronto  !!!

DRAW FOR THE WEST VETS CHAMPIONSHIP AT RENFREW

MESSAGE FROM PAST CAPTAIN ANNA TELFER

Hi Everyone
Just wanted to thank you all for your kind mention of me and your good wishes.
Can you believe it?? I'm certainly in shock that my body has let me down so badly!! Who'd have thought it? Certainly not me.
Anyhow I am being well looked after in here and trying to be patient whilst my heart races on.
Once it calms down they will be able to organise suitable medication and I'll be right as rain again. I've spent most of the time dozing and not even the sight of that lovely sunshine has tempted me - I REALLY must be ill!!
Usually I'd be champing at the bit.

Was gutted to miss the Summer Meeting at Caldwell although it looked like really tricky conditions. Great video of Heather by the way. She's one amazing woman.
Lungs are now clear so that's one tablet fewer and a step nearer. Heart still too fast so I remain on the monitor but hopefully by tomorrow it'll be slow enough for them to do an ultra sound which will help with diagnosis and further treatment.
I'll hopefully see you back on the fairways soon
Another couple of days should see me sorted I hope
Cheers Anna x 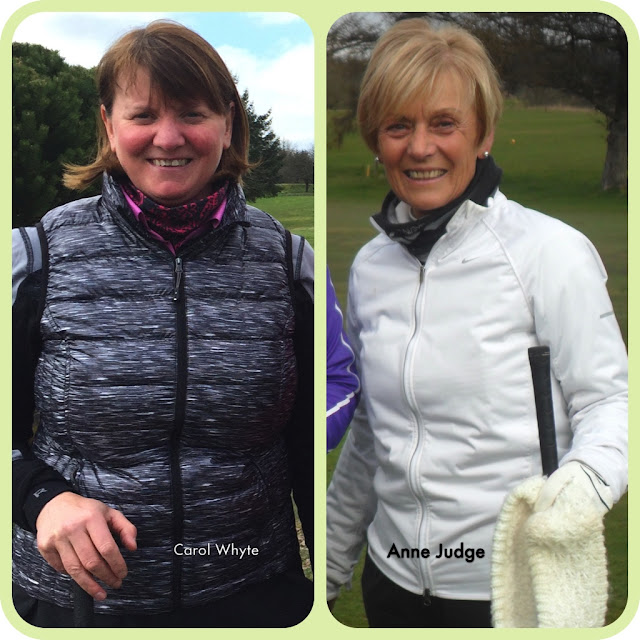 Before providing a report on the Summer Meeting today on behalf of the West Vets we would like to wish Anna Telfer a very speedy recovery and hope the Medical Staff at the QEU Hospital have her home soon.

As we have become adept at playing in windy conditions over the last three weeks, the elements decided to challenge us yet again at Caldwell.  The skills of 78 ladies were severely tested, but as usual there were some stars. 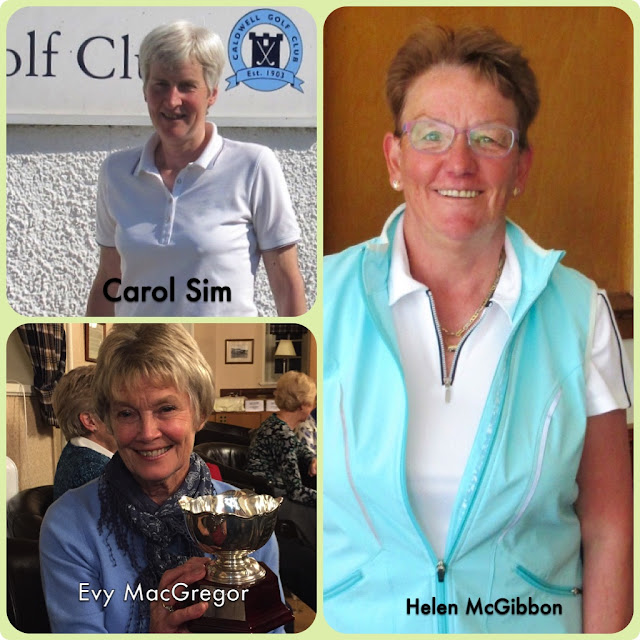 Super Vet of the Meeting was Evy MacGregor (Ranfurly Castle) with a net 77.  There were five 2's but special mention goes to Helen McGibbon (Kilmarnock Barassie) for a marvellous eagle 2 at the par 4 6th hole.

Thanks go to Anne Dunn for being present throughout the day.

Your Webmaster Carol would like to say how much she enjoyed playing with Super Vet Heather Anderson -- She was really impressed with her great swing despite being a mid octogenarian -- SEE WHAT YOU THINK !!  --- CLICK HERE