Scotland lose to Wales in the Senior Women's Home Internationals

To see the full report go to the Gillian Kirkwood Wedsite
Posted by Carol at Tuesday, September 30, 2008

Your Webmaster apologises for the links to many photograph albums not working. The Picasa Website has changed recently and all my old links seem to have changed. To access any of my public albums then click on this link in the meantime by Clicking Here
Posted by Carol at Monday, September 29, 2008

Email ThisBlogThis!Share to TwitterShare to FacebookShare to Pinterest
Labels: photographs 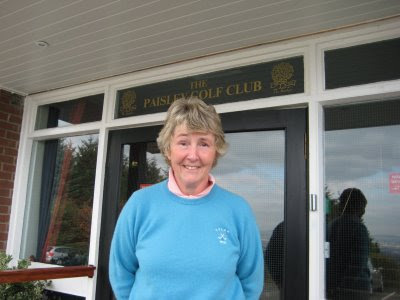 Winner of the May Craddock Trophy : Carol Fell (Ranfurly Castle)

Get your Handicap Exchange Letter here


To View all the results from today go to the Master Score Board Website
Posted by Carol at Thursday, September 25, 2008

All the results from Blairgowrie

The Scottish Vets Championships that were played at Blairgowrie at the weekend also had numerous other competitions.
To see all the results go to the Scottish Vets Website

Unfortunately NO WEST WINNERS !!
Posted by Carol at Wednesday, September 24, 2008

Looking forward to seeing everyone at Paisley on Thursday for the Autumn Meeting. Last chance to shine in the Vets this year. The views from the course will be brilliant in this good weather so enjoy them as you go.round. Good golfing everyone.
Posted by Carol at Tuesday, September 23, 2008

St Andrews hotelier Fiona de Vries, first-round leader and eventually sixth in last week's Senior British women's open amateur golf championship at Hilton Templepatrick, near Belfast, won the Scottish Veteran Ladies Golf Association championship, contested by the eight area veteran championship winners over the Lansdowne course, Blairgowrie.
Fiona, pictured right, did not have it all her own way by any means. In the morning semi-finals, the St Rule player had to go to the 20th to take the measure of Sheila Cuthbertson, the Borders veterans' champion.
In the other semi-final, Vivien Welsh (Highland) scored an upset win over former title-holder Kathleen Sutherland (Northern) by one hole.
The final went all the way before Fiona beat Vivien on the 18th green.
Thanks go to Colin Farquharson for all the Championship Reports
Posted by Carol at Monday, September 22, 2008

Vivien Welsh, the Highland champion, will play the Midlands title-holder, Fiona de Vries, in this afternoon's final of the Scottish Veteran Ladies Golf Association championship over the Lansdowne course, Blairgowrie.
Vivien beat Kathleen Sutherland (Northern) by one hole in the first semi-final this morning. Fiona had to go to the 20th to take the measure of Sheila Cuthbertson (Borders) in the other.
Posted by Carol at Monday, September 22, 2008

Email ThisBlogThis!Share to TwitterShare to FacebookShare to Pinterest
Labels: May Hughes, Scottish Vets

Helen and Janice make the cut in the British Seniors Championships

Congratulations go to West Vets Vice Captain Helen Faulds and Janice Paterson who have both made the cut after 36 holes in the British Seniors Championship at Templeton Golf Course Belfast today. To read the full report go to West of Scotland Website
Posted by Carol at Wednesday, September 17, 2008

Alex Glennie is a reserve for the Senior Home International Team

Scotland struggle in the European Seniors in Holland

Scotland will need to make a major improvement from 10th place overnight if they are to qualify for the championship match-play flight of the European senior women's amateur team golf championship at Wouwse Plantage Golf Club in Holland.
None of the Scots broke 80 in the first qualifying round.
Discarding one score, the Scots had a first-round total of 418 compared with Italy (397), Sweden (397), England (398) and Spain (398) who occupy the top four positions after the first round.
Only the leading four teams after the second qualifying round will make up the championship match-play flight. The other teams will go into lower match-play flights. To read the full report go to the Gillian Kirkwood Website
Posted by Carol at Tuesday, September 02, 2008

To see some Vets results from up North click on the following link Nothern Vets
Posted by Carol at Monday, September 01, 2008