SCOTLAND DRAW WITH WALES ON DAY 3 OF SENIOR HOME INTERNATIONALS

Scotland drew their "wooden spoon" final match with Wales at the Senior Women's Home Internationals at Newport, Wales.
The Scots led Wales 2-1 after the morning foursomes and started the singles well with Sheena Wood winning her third singles tie in a row, 3 and 2 against Ann Lewis, and Gillian Kyle winning out in the country, 8 and 7, against Patricia Fernon.
But Scotland lost the last three single, Frances Millar going down 5 and 3, Lesley Lloyd losing 2 and 1, and Donna Jackson being beaten 3 and 2.

Wales finished with a slightly better "games won" column, 9 to Scotland's 8.5, and so Scotland were placed last.

In the title-deciding match, Ireland and England, the two 100 per cent teams after two days of action, were drawing 1.5 apiece after the foursomes but wins by Gertie McMullen, Sheena McElroy and Laura Webb in the singles gave the Irish a 4.5-3.5 victory, ending England's bid for a fourth title in a row.

Defending champions England will meet Ireland tomorrow in the title decider at the Senior Women’s Home Internationals at Newport, Wales.

Both teams have a 100% record of two wins from two matches so far, with England defeating Scotland 5.5-2.5 today, having previously beaten Wales 5-3.

England captain Debbie Richards commented: “It will be a big day tomorrow for both teams as the winner will lift the trophy.” England are aiming for their fourth consecutive win and their 11th overall victory in this championship. Today, the team made a great start to the match, winning all three foursomes.

In the afternoon singles the matches were very tight and after nine holes could have gone either way. But England fought hard in the windy and cold conditions to eventually secure a comfortable win. In the other match Ireland beat Wales 6-2, having previously beaten Scotland by the same margin.


Scotland were beaten 6-2 by Ireland while defending champions England, bidding for a fourth title in a row, beat Wales 5-3 on the opening day of the Senior Women's Home Internationals at Newport Golf Club, Wales.
The writing was on the wall for the Scots, who won the title in 2009 when the tournament was last played at Newport, when they lost all three morning foursomes.
Fiona De Vries and Sheena Wood won their afternoon singles but Ireland won the three other ties to complete a comfortable win.
England shaded the foursomes 2-1 and the singles 3-2 for their 5-3 win over Wales.

LIVE SCORING FROM THE SENIOR HOME INTERNATIONALS
Posted by Carol at Tuesday, October 03, 2017

GILLIAN, LESLEY AND DONNA IN UNIFORM 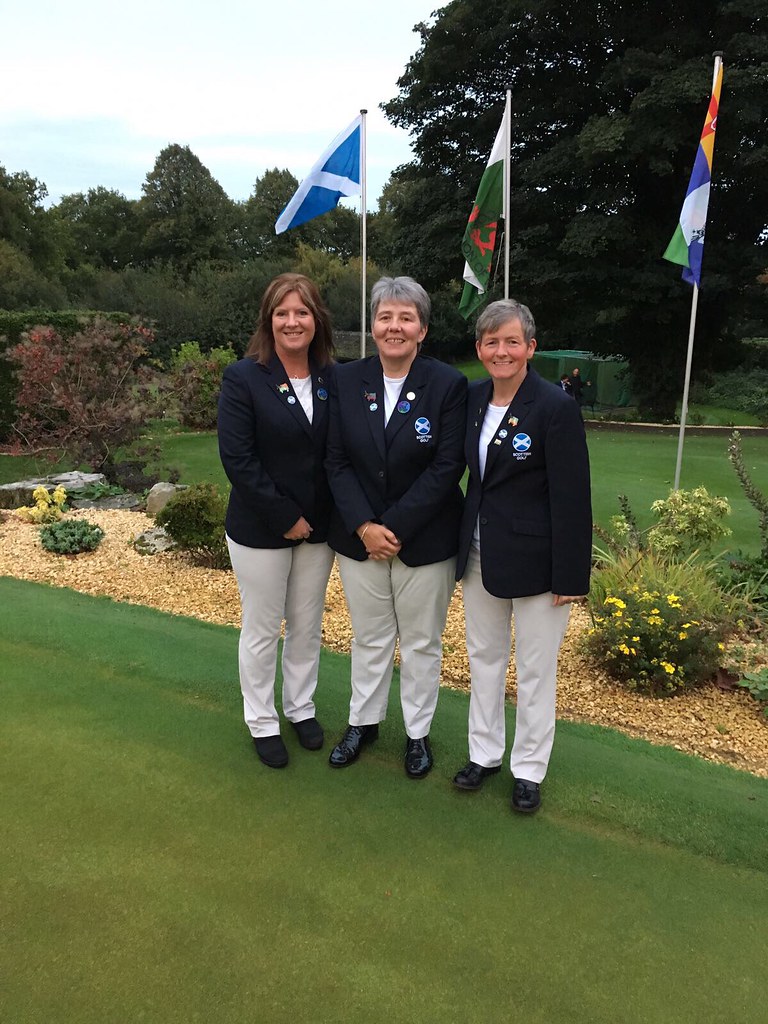 West Vets Gillian, Lesley and Donna at the Opening Ceremony on the eve of the Senior Home Internationals at Newport , Wales.