Anna and her Milngavie Team win the 2009 Greenlees Trophy 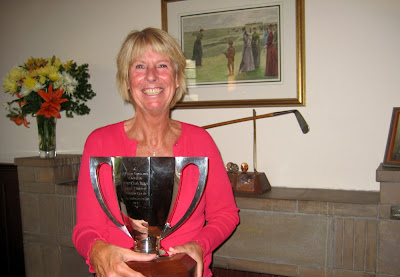 Also to see Anna say a few words when she receives the trophy then CLICK HERE
Posted by Carol at Tuesday, October 27, 2009

SCOTLAND MAKE HISTORY - PLUS SOME PHOTOGRAPHS

Alternatively go to the East Vets Website for all the details
Posted by Carol at Saturday, October 03, 2009 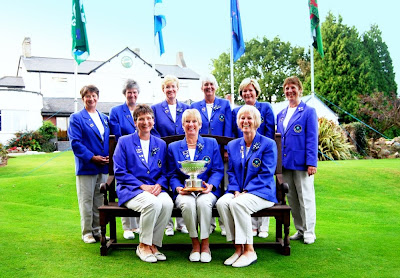 Having first beaten Ireland and then England, the Scots won the title and the Sue Johnson Trophy for the first time, completing a 100 per cent winning record through the three days by beating last year’s winners, Wales, 5 ½-2 ½ today.

Skipper Pam Williamson’s Scotland team showed no last-day nerves as they captured the morning foursomes by 2 ½ to ½ against Wales to make their task in the five afternoon singles that much easier.

They began the afternoon play needing only 1 ½ pt for a draw which would have been enough to clinch the over-50s team championship but instead the Scots had three singles winners in Heather Anderson, who beat the Senior British champion Vicki Thomas by one hole, Fiona De Vries, who beat Pamela Valentine by 5 and 3, ending the series with a perfect 6points from six matches, and Mary Smith who beat Jane Rees by 4 and 3 for her fifth point in six outings.

Anderson v Thomas was a game of two halves – the Scot had the better of the first nine, the Welsh player not losing a hole after the turn. Anderson birdied the second and the fifth on her way to a three-hole lead after eight holes.

That was as good as it got for the Scot. Thomas won the 11th and 15th to be only one down on the 16th tee. But Smith managed to halve the last three holes for a win she will remember.

Kathleen Sutherland, who came into the Scotland team only last week when star player Lorna Bennett had to withdraw for domestic reasons, lost her 100 per cent winning record when she lost by 4 and 2 to Ann Lewis.

The exchange of holes continued at the 12th which Lewis won to regain a two-hole lead. Lewis wrapped up a 4 and 2 victory by winning the 15th and 16th.

Fiona De Vries won the second, third and fourth against Valentine and stretched her lead to six holes after 11, having birdied the 10th. Valentine did birdie the 14th but that only cut her deficit to four holes and Fiona clinched her sixth victory in three days by winning the 15th for a 5 and 3 success.

That raised Scotland ’s points on the day to 4 ½, which meant they had won the match, whatever the outcome of the ties still to finish.

Mary Smith made it 5 1/2pt in the bag when she beat Jane Rees by 4 and 3. After the third and fourth holes were exchanged, Smith won the sixth to take a lead she did not relinquish.

The Scot won the eighth to go two up, lost the ninth but then won the 11th, 13th and 14th to surge four holes to the good. A half at the next ended the contest.

Wales got their second singles win, thanks to Jean O’Connor, who beat Moira Thomson by 5 and 4. O’Connor took a stranglehold on the outcome by winning the first, third, seventh, eighth and 10th for a five-hole lead. She even birdied the 12th to regain that advantage after the Scot had scored her only success at the 11th. Halves at the 13th and 14th ended the match.

LIVE SCORING FROM THE SENIOR HOME INTERNATIONALS
Posted by Carol at Thursday, October 01, 2009