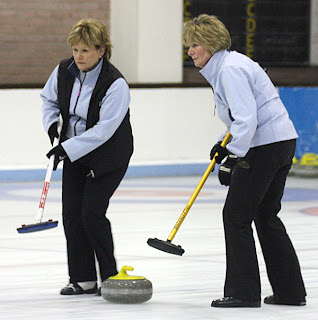 In happier times, here is a photo of Fiona, on the left, ready to sweep with Maggie Scott in the final of the Scottish Senior Championship at the Lanarkshire Ice Rink. Photo © Skip Cottage.

The reports is that she is now recovering from her surgery to pin her broken bones. According to sources in Saint Paul the operation was successful and she will need to stay in hospital for about ten days.

Her husband is making arrangements to come out and stay with her as the teams fly home tomorrow. The members of the US ladies' team are going to make sure Fiona is not lonely and are setting up a rota for visiting the hospital and apparently have offered accommodation for her husband when he arrives.

The West Vets wish her a speedy recovery
Posted by Carol at Monday, April 25, 2011

Happy Easter to all our West Vets Readers

CLICK HERE to view your Easter Card
Posted by Carol at Saturday, April 23, 2011

Email ThisBlogThis!Share to TwitterShare to FacebookShare to Pinterest
Labels: Easter

It was a beautiful day at Prestwick St Cuthbert today in the West Vets Spring Meeting and the scores certainly reflected the good conditions.
Robina Gilbertson (Prestwick St Nicholas) was the best of the day with a scratch score of 74 -- 3 over the SSS of 71.
The best Net Score of the day was by May McGhee from Balmore who had a fantastic net 65 off a handicap of 24. She also therefore won the title of "Super Vet "
Highlight of the day was a Hole in One at the 9th by Sally Coster (Hilton Park) pictured above with her playing partners Mamie Robin from Elderslie and Anne McKellar from Whitecraigs who had enjoyed the great event. It was Sally's 3rd Hole in One and many of the competitors enjoyed a wee glass of wine back in the clubhouse --- Compliments of Sally.

Janette Stewart from Kilmarnock Barassie was the winner of the Silver Division with a net 66.

CLICK HERE to see the "Course Stats" for the Day

PLEASE NOTE YOU WILL ALSO FIND THESE LINKS ON THE RHS OF THIS WEBPAGE
Posted by Carol at Tuesday, April 19, 2011

The annual Veteran's match against Ireland for the Mary McKenna Perpetual Trophy has been played at Craigielaw yesterday and today. West Vets May Hughes was playing for Scotland

Scotland, despite a brave fightback in the singles, lost 6 1/2-5 1/2 to Ireland in the two-day senior women's amateur golf international match for the Mary McKenna Trophy at Craigielaw Golf Club today. The Irish built up a three-point lead in Sunday's four-ball foursomes when the Scots could muster only half a point from the four ties.
The home team took the singles 5-3 today with wins by Moira Thomson, Anne Ryan,
Lorna Bennett, Elaine Allison and Alison Bartlett but it was not enough to make up the leeway.

TO READ THE FULL REPORT GO TO THE EAST VETS WEBSITE
Posted by Carol at Monday, April 18, 2011

I am so pleased to see so many of you have entered the Spring Meeting next week at Prestwick St. Cuthberts. It would be nice to think that we will have a dry and sunny day, but appreciate that to have both will be a real bonus!! Hopefully most of you will have managed to play some competitive golf before next week, but if not, the 19th April will be something to look forward to!
Most of all enjoy the day and I look forward to seeing you all at the beginning of another season of Vets golf.
Fiona
Posted by Fiona at Tuesday, April 12, 2011