Turnhouse Golf Club was the venue for the East v West Foursomes Match, playing for the Friendship Trophy.
The match was played in dry but difficult windy conditions but was a course that all players enjoyed. The West were warmly welcomed by the East team and that friendship continued into the games.
It was also great to have 5 players representing the West for the first time.

The match was closely contested and finished in a halved match. and West retained the trophy which they won last year at Kilmacolm

The results were as follows, (WestVets named first)

A big thank you to Turnhouse Golf Club and East Vets Vice Captain, Anne Rorrison for hosting such an enjoyable day.

THE DRAW FOR THE AUTUMN MEETING AT DOUGLAS PARK

The course is looking terrific after the wonderful summer - and with an entry list of 82 players, we are all hoping that the sunny weather shines on us at DP.

The kitchen will be open from 8.30am for hot rolls and scones.   Snacks and  light meals will be available later in the day.

The SVLGA Team have returned home from Hexham with a very positive outlook for the future. This year’s team included 4 new players and like many before them, they quickly got to see what a high standard of golf is played at this event.

We got off to a slow start against the North on Tuesday but each day performance improved as the team got into their stride.
The Miller Stirling Trophy was won by the South. The Tony Moffat runner up trophy was won by the North. Scotland improved on last years placing by finishing third, pipping Midlands into fourth place.

On the first two days, we felt there were a few matches that got away from us with a number of matches going down the 18th. However, every member of the team played their part in the victory on the last day whether playing foursomes or singles.

In the morning foursomes, Alison Davidson, heroine of the winning Curtis Cup team of 1996, partnered by her county teammate Linda Allan set the scene with a terrific win against the Midlands second couple, Sue Spencer and Debbie Warren.

In the afternoon singles, Scottish Senior Champion Elaine Moffat got off to a hot start and secured an excellent victory over former professional golfer Julie Brown. Scottish Veteran Ladies Champion Sheena Wood cruised to a comfortable win against Mary McLaren.

There were many outstanding ‘shots of the day’ not least from Liz Stewart’s winning shot to the 18th against English Senior Amateur Stroke Play champion Helen Lowe.
Liz’s point was invaluable as it gave Alison Davidson the opportunity of clinching the last vital point in her match against Catrin Russell. Alison was 2 up playing the 17th. Catrin rolled in her putt for a birdie 3 but Alison coolly followed her in to give us the winning 5th point. What a performance!

Captain Ellie Whyte and Vice-Captain Karen Ballantyne are already working on some new initiatives to help the squad with their winter training and we hope the team take at least one further step up the ladder next August when the jamboree will be hosted by Midlands Division at Northamptonshire County Golf Club.

Thanks must go to Hexham Golf Club and the committee of the North Vets Association for organising an excellent jamboree.

Thanks go to Karen Ballantyne for the report  SVLGA Website 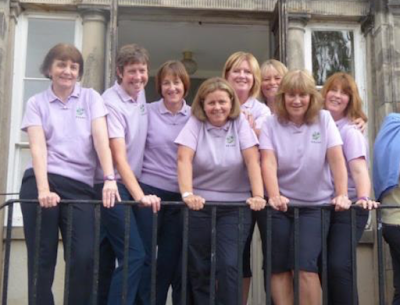 CLICK HERE FOR ALL THE TODAY'S RESULTS - From the SVLGA Website
Posted by Carol at Tuesday, August 07, 2018

The Scottish Vets team has arrived at Hexham for the 2018 Jamboree today.