Thanks go to Colin Farquharson for the report
Posted by Carol at Tuesday, August 31, 2010 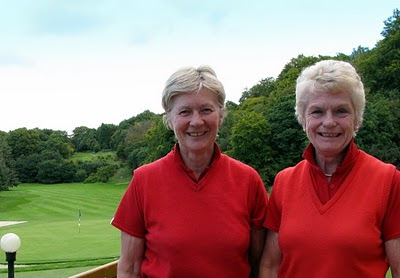 1st Handicap - Helen Faulds and Helen Robertson (Douglas Park)
Many Congratulations go to West Vets Helen Faulds and Helen Robertson who had the best net score in the the 2010 SLGA Scottish Foursomes Strokeplay Championships held at Douglas Park yesterday.
To read all about it --- Click on the following link --- The West of Scotland Ladies Golf Website
Posted by Carol at Monday, August 30, 2010

The Bronze Chamionship Final was played yesterday at Renfrew Golf Club between Maureen Rennie (Douglas Park) and Jane Thomson (Ladies Club Troon).
It was a close fought match with never any more than two holes separating them. The overhead conditions were very pleasant and the course in excellent condition. Maureen moved two clear after the 16th with a lovely par 5 and the 17th was halved giving Maureen a 2 & l victory. Well done Maureen and well played Jane.
Unfortunately due to a fire in the kitchen and dining area at the Club, we were unable to celebrate Maureen's win.
The club had a bar area set outside, but as we left the course, the heavens opened and it did not seem a good idea to hang around!

We plan to celebrate some other time!
Posted by Fiona at Friday, August 27, 2010

A round-up of events where Vets from the different divisions have participated, is included in the SVLGA website (can be obtained on the Link down the right - hand side). Go into the SVLGA website and look for Vetsround under "Latest News" if you want to hear how friends from other divisions may be doing.

Thanks go to Noreen Fenton from East Vets for putting on all the latest news --- Newsletter 11 is now on -- Apologies to Noreen in the delay !!
Posted by Carol at Friday, August 27, 2010

The Asp Trophy won by the East 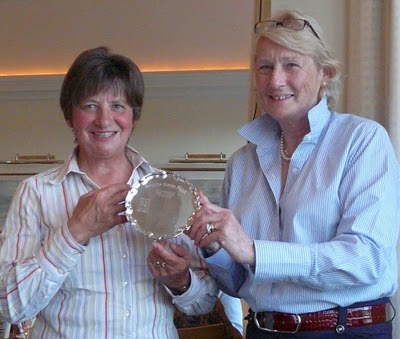 Fiona Roger presents East's Noreen Fenton with the Asp Trophy (Photo Courtesy of Noreen Fenton) - Click to enlarge
In what could only be described as mixed weather conditions the East Vets beat the West Vets yesterday at Gullane by 3.5 to 1.5 and were delighted to win the Asp Trophy for the first time since 2004. The first 5 or 6 holes were played in heavy rain and conditions could only be described as miserable! However the heavy rain eased and conditions improved greatly.
This match was the usual format played as a scratch foursomes for ladies with handicaps 10 to 15 and all the games were very evenly matched although five of the West team had never played the course before. Two games went very much in favour of the East but the other three went all the way to the 18th green.
It is always a pleasure to play at Gullane and yesterday was no exception. We were warmly welcomed and had a lovely meal after the match with plenty of chat and laughter. Both captains, Noreen and Fiona said a few words and Fiona presented the Asp Trophy to a very happy East captain who couldn't keep the smile off her face! Well done! We look forward to our next meeting in 2011 in the West.
Thank you to all the West team who travelled to Gullane and tried their hardest to bring the Trophy back to the West!

To see some photographs of the event (taken by East Vets Noreen Fenton) ---- CLICK HERE
Posted by Fiona at Tuesday, August 10, 2010

PHOTOS FROM THE JAMBOREE

East Vets Webmaster Noreen Fenton and member of the Scottish Team that won the Millar-Stirling Salver took plenty of photos . To see her Album CLICK HERE
Thanks Noreen --- They are great
Posted by Carol at Monday, August 09, 2010

Scotland has won the Miller-Stirling salver after a nail-biting finish. They beat the North by 6 - 3 which was the product of a regrouping and a re-attacking which one Scottish on-looking gent declared was something our football team should learn from. Having got 2/1 in the morning foursomes all that was needed was three points from the singles and whereas at one point this may have looked feasible, halfway through, Captain Pamela Williamson had changed into a ranging loony - is one allowed to say that? - as she wandered from one hole to the next trying to gather up possible points as they seemed to be slipping away. But slender leads were hung on to, dormie situations turned into halves and May Hughes serenely brought up the rear oblivious of what was transpiring elsewhere - she had the most glorious birdie four at the sixteenth (which in general rendered most people into quivering wrecks) to make the situation all the safer by becoming dormie two.
Thanks go to Easts Noreen Fenton for this report
To read more go to the East Vets Website
Posted by Carol at Thursday, August 05, 2010

North will have won against the South.

Tomorrow (Thursday) Scotland play North who have an unbeaten record. They have to win.

Scotland have made a winning start in their campaign to retain the Miller Stirling Trophy at Seascale Golf Club in Cumbria.
In their first match against England South they won the foursomes 2-1 and in the afternoon won 4 of the 6 singles to finish 6-3. A good start.