Scottish Vets are Champions after final day is a wash out

Video of the Scottish Seniors Matchplay Final at Deeside

Here is a video of the Final of the 2008 Scottish Seniors Matchplay Championship at Deeside Golf Club at the beginning of August. West Vets Alex Glennie is in the 2nd Flight Final To see the video Click Here
You need to be on broadband . --- If you connection is too slow try clicking on watch in standard quality
Posted by Carol at Wednesday, August 13, 2008

The Scotland team for the Veterans' Jamboree against England North, England Midlands and England South at Southerness Golf Club are playing from August 12th to 14th 2008

West Vets win against the East Vets at Gullane 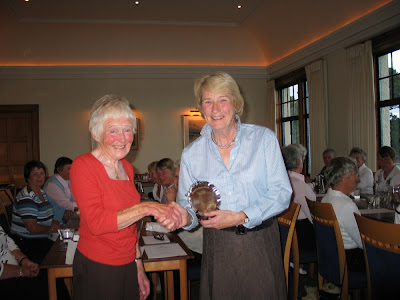 The Annual Foursomes match between the West and East Vets was played over Gullane today. The West Vets Team won 3 - 2 to win the the ASP Trophy (Amicitia Semper Palma) ---- Friendship Always The Prize. The match was played in not to bad conditions except for one exceedingly heavy shower.
A gorgious evening meal was enjoyed back in the clubhouse afterwards.
East Vice Captain Elise Guy presented West Vets Team Captain for the day Fiona Roger with the trophy and the day was enjoyed by all
Match Results:(West Players 1st)
C Fell and F Roger halved with M Lauder and S King
J Graham and R Henderson won 7/6 against G Thomson and B Redwood
E Young and G Campbell won 5/3 against D Mitchell and J Roberts
S Macfarlane and C Dingwall halved P Early and V Hallam
A Dunn and M Stewart lost 3/2 against E Smith and C Ross

To see some photos click on the small photo below:
Posted by Carol at Monday, August 11, 2008

May Hughes in the Scottish Team

Margaret Tough has had to pull out of the Scotland team for the Veteran Ladies Golfing Association Jamboree at Southerness whch begins tomorrow. She has a back complaint.
West Vets Champion May Hughes (Lanark) takes her place and joins West Vets Vice Captain Helen Faulds (Douglas Park) in the team
Posted by Carol at Monday, August 11, 2008

Alex Glennie and Anna Telfer do well at the Scottish Seniors 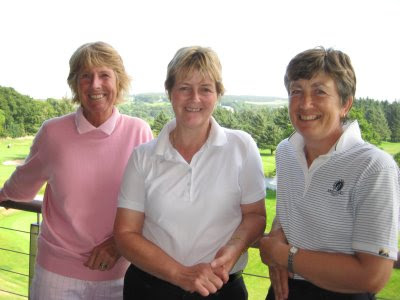 Congratulations go to West Vets Anna Telfer (Milngavie) and Alex Glennie (Kilmarnock Barassie)in their recent success at the Scottish Seniors at Deeside last week
Alex, Suzanne Cadden (Cardross)-- Hopefully joining the West Vets next season and Anna pictured above from right to left were the best from the West.
Anna and Alex qualified for the matchplay stages. Anna reached the quarter final stages to be beaten by the eventual winner Lorna Bennett (Ladybank) and Alex lost in the final of the 2nd flight to the 2007 Scottish Strokeplay Champion Kathleen Sutherland (Montrose)
Alex who also won the best net aggregate prize over the 2 day qualifying rounds was selected as 3rd reserve for the Scotland squad for the European senior women's amateur team championship at Wouwse Plantage Golf Club, the Netherlands from September 2nd to 5th.
To read all the results, reports, photographs and videos go to the West of Scotland Website
Posted by Carol at Monday, August 04, 2008