The AGM of the SVLGA (West Division) will be held on the 1st November 2007 in Cowglen Golf Club at 2:30pm.
The annual subscription for 2008 of £15 may be paid then. Alternatively cheques made out tp SVLGA (West) may be sent to the Treasurer. (See Fixture card for address)
Any membership not paid by 31st January 2008 will be taken as a resignation and the resulting places offered to those on the waiting list
Posted by Carol at Sunday, October 21, 2007

Scotland are Runners Up in Home Internationals 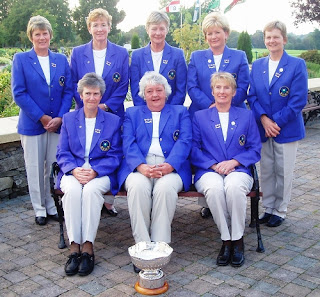 England retained the Senior Home International Title for the fifth year at Royal Tara Golf Club, beating Ireland in their final match (5-2) to win the trophy. England have won this tournament since it began in 2003. Scotland were the runners up, winning 4 - 3 against Ireland, losing 4 - 3 against England and drawing 3 ½-3 ½ with Wales just beating them by half-a-point for second place on a comparison of the individual games won.
West Vets Vice Captain -- Helen Faulds (Douglas Park) was part of the Scottish Team