West Vets win the Asp Trophy against the East 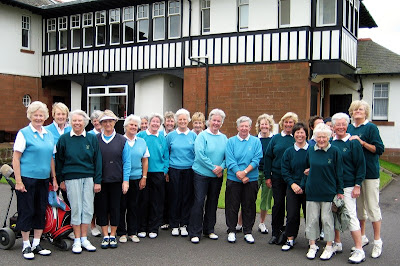 Scotland's veteran women's golfers lost their two-year grip on the Miller Stirling Trophy on the final day of the Veteran Ladies Golfing Association's area championship at Royal Cromer Golf Club, Norfolk.
After drawing their matches on the first two days, the Scots, skippered by Pat Hutton, needed to beat England South and hope that Midlands and North drew the other match.
It was not to be. South edged a 5-4 win over the Scots and North beat Midlands 8-1 to take the title.
"I couldn't have asked for a bigger effort from my team but I think they were just drained by their efforts in the European senior women's team championship last week. I don't think they had anything left to give in the final session," said Mrs Hutton.
The Scots won the morning foursomes 2 1/2-1/2 against South but lost the singles 4 1/2-1 1/2. Only Lorna Bennett (Ladybank) managed a 2 and 1 win while Heather Anderson (Downfield) secured a square game.
Details:

Scotland followed up their opening day draw against England North by drawing 4 ½-4 ½ with England Midlands in the Veteran Ladies Golf Association area team golf championship at Royal Cromer Golf Club, Norfolk.
The foursomes were shared 1 ½-1 ½ and the singles session ended 3-3 after wins for the Scots by Kathleen Sutherland (Royal Montrose), Helen Faulds (Douglas Park) and Noreen Fenton (Merchants of Edinburgh).
England North beat England South 7-2 in the other match which means that Scotland, if they are to retain the Miller Stirling trophy, must beat South in their final match and hope that the North v Midlands ends in a draw.

Other result:
ENGLAND S0UTH 2, ENGLAND NORTH 7.
Thanks go to Colin Farquharson for the report
Posted by Carol at Wednesday, August 08, 2007

Skipper Pat Hutton's team trailed by 2pt at lunchtime after taking only half-a-point from the three games but they came storming back into the picture in the six singles.

"It was a good performance to get a draw from the position we were in," said Pat Hutton.

Incidentally, the England North line-up included former Scottish women's amateur champion and international team captain Fiona Anderson who has been based on Merseyside for a number of years.

Noreen Fenton (Merchants of Edinburgh), partnering Lorna Bennett, had a hole in one at the 17th in their foursome against Hilary Smythe and Elaine Elliot.

It was the third ace of Noreen's golfing career. It squared the match but Noreen and Lorna lost the 18th to go down by one hole.

In the other match in the four-cornered contest, England Midlands beat England South 5 ½-3 ½.

Thanks go to Colin Farquharson and Pat Hutton for the report
Posted by Carol at Tuesday, August 07, 2007

Pat Hutton skippers the Scots for the last time

Pat Hutton skippers Scotland for the last time in the Veteran Ladies Golf Association jamboree at Royal Cromer Golf Club, Norfolk over the next three days.
"We are defending the Miller Stirling Trophy and I am hoping to bow out on a successful note," said Pat, pictured right, who was a very successful Lanark and county team player in her day and, more recently, chairman of the SLGA.
The Scots open their campaign with a match against England North tomorrow.
The two other teams in the four-cornered, all-play-all contest are England South and England Midlands.
The Northern Division provide two of the squad of eight - Heather Anderson (Downfield) and Kathleen Sutherland (Royal Montrose) - Midlands two, Lorna Bennett (Ladybank) and Fiona De Vries (St Rule).
East have three representatives in the line-up - Noreen Fenton (Merchants of Edinburgh), Moira Thomson (North Berwick) and Pamela Williamson (Baberton).
The eight member of the team is Helen Faulds (Douglas Park) who played well for the Scotland in the recent European senior women's team championship in Sweden where the Scots finished a highly creditable fourth after making the championship match-play flight.
Posted by Carol at Monday, August 06, 2007

We wish them every success.
Posted by Carol at Monday, August 06, 2007