Have you got your Scottish Seniors Entry Form in

Reminder
The closing date for the Scottish Senior Ladies' Championship at Kinross is Monday 1 June at 12 noon.
Posted by Carol at Friday, May 29, 2009

(Double click on the slideshow to go to the album and then click slideshow to see larger version of the photographs --- taken by Helen Faulds)
As promised here is the result of the Bronze Championship played today over Renfrew.
Maureen Rennie(Douglas Park) beat Anne Donnelly(Whitecraigs) 6 & 5
The game was played in good conditions and in a great spirit. Maureen & Anne had a good game but the former was playing beautifully round and on the greens. I don't think she missed a putt the whole match!

Thank you to Renfrew Golf Club for allowing us courtesy of the course to rearrange the final.

The Championship Final will take place at Renfrew on Thursday 9th June at 11am between Helen Faulds(Douglas Park) and Linda McDougall (Greenock)
Posted by Helen at Thursday, May 28, 2009

The Final of the West Vets Bronze Championship takes place tomorrow-Thursday 28th May-at Renfrew Golf Club at 11am.
The finalists are Maureen Rennie (Douglas Park) and Anne Donnelly (Whitecraigs). The match will be refereed by yours truly. Pictures and result will be posted tomorrow.
Posted by Helen at Wednesday, May 27, 2009

Congratulations go Midland Vets who have created a new Website for their Divisional News reports.
To read all their news you can click on the link further down the RHS of this website.
Posted by Carol at Wednesday, May 27, 2009

Email ThisBlogThis!Share to TwitterShare to FacebookShare to Pinterest
Labels: midlands

Thanks also for the photos Noreen who said-
"Photograph taking was not the order of the day" -- "Helen was not co-operating" .
"I do have some pictures of the beach at Southerness and some of the more scenic holes. People see me coming with the camera"
I know how you feel Noreen !!!!

Helen reaches the quarter finals of the Clark Rosebowl at Southerness

At Southerness West Vets Captain -- Helen Faulds (Douglas Park) won through to the second round of the Clark Rosebowl.
She beat fellow Scottish Vet Jill Harrison from Cruden Bay by 3 and 2.
She then lost 2 and 1 to Linda Urqhuart of Banchory.
WELL DONE HELEN TO BE THE ONLY VET TO MAKE IT TO THE QUARTER FINALS
Posted by Carol at Thursday, May 21, 2009

Alex Glennie is the Winner at Douglas Park 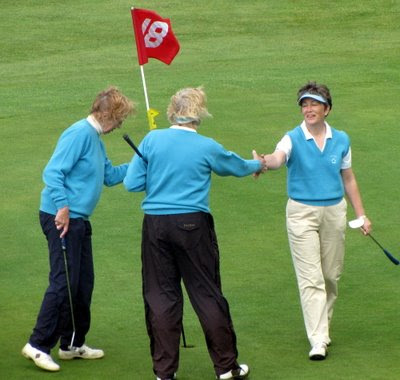 Alex Glennie is congratulated on the 18th Green at Douglas Park

West Vets Captain qualifies for the Clark Rosebowl at Southerness

Congratulations go to West Vets Captain Helen Faulds who has qualified for the 2nd flight matchplay stages of the Scottish Championships at Southerness. Click on the following link to see the draw for tomorrow --- Clark Rosebowl
For all the News of Vets go to the East Vets Website where Noreen Fenton is doing a grand job --- Thanks Noreen for all your report
Posted by Carol at Wednesday, May 20, 2009

Round 1 Results from the Scottish Championships

Helen Faulds - Captain of the West vets was playing over Southerness Golf Club today in the Scottish Closed Championships -- To read all the Vets news at the event go to the East Vets Website by clicking on the following link ---- Day 1 Results from the Scottish Championships
Posted by Carol at Tuesday, May 19, 2009

Thanks go to Noreen Fenton from the East Vets Website who is giving us all the information from Southerness Golf Club where Helen Faulds our West Vets Captain is this week at the Scottish Closed Championship
Posted by Carol at Monday, May 18, 2009 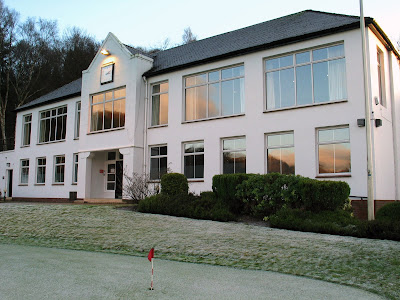 Douglas Park Golf Club in the Frost - Click to enlarge
Just a reminder that our Summer Meeting is this Thursday, 21st May at Douglas Park Golf Club.
Running ballot from 9.30-11.30am.
The Heather Anderson Trophy awarded for best SCRATCH score.
Fingers crossed for good weather!!!
Posted by Helen at Sunday, May 17, 2009

The closing date for the Scottish Ladies' Senior (Close) Championship to be held over the Montgomery Course at Kinross, 30 June - 3 July is Monday 1 June. The Championship is for those over 50 years of age on the first day of the Championship with a handicap of 20 or less. An entry form is available from the SLGA website.
Posted by Carol at Thursday, May 14, 2009

As the weather played havoc with our championships at Renfrew Golf Club this week we were unable to complete the finals on time. These have now been rescheduled on the following dates:
Thursday 28th May at 11am: Maureen Rennie(Douglas Park)v Anne Donnelly(Whitecraigs)
Tuesday 9th June at 11am : Helen Faulds(Douglas Park) v Linda McDougall(Greenock)
Posted by Helen at Thursday, May 07, 2009

The semi finals of the West Vets Championship were completed today – starting at 11am in light rain but weather deteriorated with strong winds and rain.

We are now looking for suitable dates to play the finals. Will let you all know asap.

Semi Finals of the Championship are Abandoned due to Flooding !! 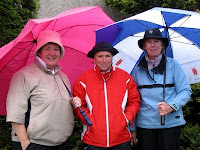 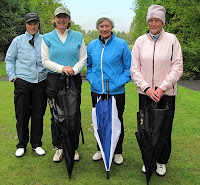 Despite a constant drizzle the quarter finals of the West Vet’s championships were played this morning - 5th May-at Renfrew Golf club. Unfortunately the semi finals had to be abandoned in the afternoon after 4 holes due to extremely adverse weather conditions and will now be played tomorrow –6th May — 11am
Championship:
Helen Faulds (Douglas Park) v Janice Paterson (Drumpellier)
Maureen Woodhead (Gourock) v Linda McDougall ( Greenock)
Bronze:
Anne Donnelly (Whitecraigs) v Helen Crichton (Ranfurly Castle)
Posted by Carol at Tuesday, May 05, 2009