GOOD LUCK TO OUR WEST VETS DONNA, GILLIAN AND LESLEY IN THE HOME INTERNATIONALS

The Ladies Senior Home Internationals was first played in 2003. The championship is an annual event played over three days featuring teams from England, Ireland, Scotland and Wales

CLICK HERE for all the Players from England, Ireland, Scotland and Wales

GOOD LUCK to Donna, Gillian and Lesley and all the Scottish Team
Posted by Carol at Friday, September 29, 2017

West Vets starred well at Blairgowrie at the SVLGA with Liz Hale (Caldwell) playing off 12 being the overall winner of the Patrick Trophy with a net 72.
Joanne Sharp (Kilmarnock Barassie) was 3rd  and Anna Telfer (Milngavie) 5th -
Both Liz and Anna were also prizewinners in their age group. 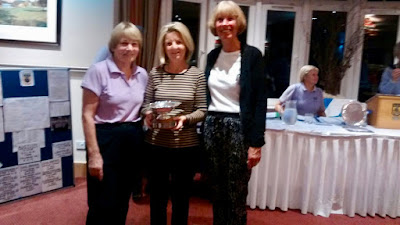 Thanks go to Morag Key for photos

Sheena Wood (Aberdeen Ladies) has won the Scottish Veteran Ladies Golf Association match-play championship over the Lansdowne course, Blairgowrie for a second time in three years.
She beat Jennifer Bryans (Turnhouse) by 4 and 3 in this afternoon's final. 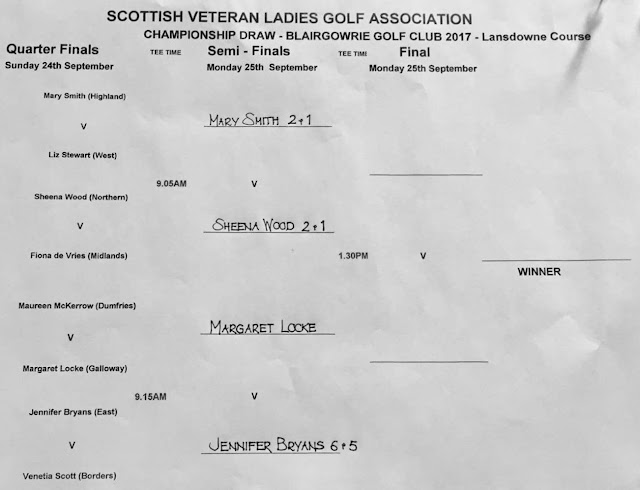 Monday morning's semi-finals in the Scottish Veteran Ladies Golf Association championship over the Lansdownie course, Blairgowrie will feature Highland champion Mary Smith (Tain) versus Sheena Wood (Aberdeen Ladies), the Northern title-holder. at 9.05am, while at 9.15 it will be Margaret Locke, the Galloway champion, against Jennifer Bryans (Turnhouse), the East title-holder.

In Sunday's quarter-finals, Mary Smith was a 2 and 1 winner against the West champion, Liz Stewart (Greenburn), Sheena Wood also won by 2 and 1 against Fiona De Vries (St Rule), the Midlands champion, Margaret Locke won by 1 hole against Maureen McKerrow (Dumfries), and Jennifer Bryans beat Venetia Scott (Torwoodlee), the Borders champion, by 6 and t5.
The final will tee off at 1.30pm.

CLICK HERE FOR RESULTS
Posted by Carol at Sunday, September 24, 2017

The 2017 Vets competitions at Blairgowrie are as follows:

Draw for the Scottish Vets Championship

SCOTLAND SENIORS SUCCESSFULLY WIN THE FINAL OF FLIGHT B IN SLOVENIA

Having beaten Iceland 4.5 - 0.5 and Finland 4 - 1 Scotland seniors kept up their good play in the match play stages by beating Italy 4 - 1 in the final of the Flight 2 Group.

After what was a disappointed qualifying 1st round Scotland finished in 10th place after the 2 qualifying rounds on Tuesday and Wednesday of this week -- 1 behind Italy in 9th place.

However the matchplay stages all 6 players in the team were unbeaten in the matchplay games over the last 3 days which was a terrific effort by all.

Many congrats go West Vet Lesley Lloyd and to Gillian Kyle who was also the top player for Scotland in the qualifying rounds.

To read all the reports go to Kirkwood Golf Website

HUNT FOR THE MISSING TROPHY !

We have presently lost track of the Patrick Rosebowl, won by Alex Glennie at Blairgowrie last September.
After engraving work, it was delivered to Kilmarnock Barassie G.C. in November after our AGM at Cowglen.
However then the trail goes cold, even though it is a sizeable trophy in a large brown cardboard box. There is also a voucher for Alex attached or in the box.
If anyone can shed any light on its whereabouts, we would be most grateful.

Email ThisBlogThis!Share to TwitterShare to FacebookShare to Pinterest
Labels: notices


Scotland Seniors finished in 10th place in the European Seniors Team Championships Slovakia today. England finish 1st with a total score of 744 - (best 5 scores to count each day) , Ireland on 757 and Scotland on 773.

England and Ireland have both qualified in Flight A for the matchplay stages with Scotland in Flight B.
In the individual event West Vet Gillian Kyle was the leading Scot on +8 over the 2 rounds tied 25th.
Nathalie Lamboult (France) and Fiona Edmond (England) tied in 1st place on 145 on +1

For all the results go to the European Website
Posted by Carol at Wednesday, September 06, 2017

GOOD LUCK FROM ALL WEST VETS IN THE EUROPEAN TEAM CHAMPIONSHIPS
Posted by Carol at Monday, September 04, 2017


The Scottish Senior Ladies team for the European Team Championships at Golf Resort, Skalica in Slovakia 5th - 9th September have arrived safely. However the team soon found themselves in a spot of bother ---
New uniform and team bonding was required !!

GOOD LUCK EVERYONE AND WE HOPE YOU HAVE NO MORE TROUBLE 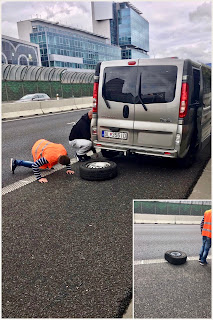 Thanks go to Gillian Kyle for the photos
Posted by Carol at Sunday, September 03, 2017