The West Vets Championship for 2009 takes place at Renfrew Golf Club on the 5th - 6th May 2008. The first 8 Silver and 4 Bronze in the Spring Meeting at Sandyhills have qualified for the Divisional Championship.
The draws are as follows:

Scots Vets lead Irish by One Point at Cruden Bay

The Scottish Veteran Ladies Golf Association select will start the second and last day of their annual Mary McKenna Salver match with a 2 1/2-1 1/2 lead over the Irish Seniors team at Cruden Bay Golf Club.
The match finishes with eight singles, the first of which tees off at 11am on Sunday.
The Scots' winners today were Lorna Bennett and Fiona De Vries who beat Sheena McElroy and Marilyn Henderson 3 and 2, and Jill Harrison, and Fiona Hunter who beat Helen Jones and Mary McKenna by one hole in a match of rare quality - the better ball was an amazing 10 under par.
Ireland's win came from Valerie Hassett and Violet McBride who beat May Hughes and Kathleen Sutherland by 2 and 1.
The halved match featured Scotland's Heather Anderson and Mary Smith against Ireland's Mary Madden and Pauline Walsh.

There's life in the Old Dog Yet !! 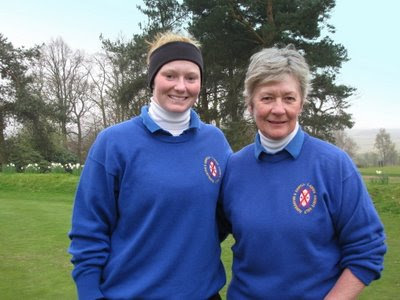 She started the match well with a birdie 3 --- sinking a 42ft putt at the 1st. However she eventually lost to the eventual winner - Scottish Internationalist Kyle Walker
Posted by Carol at Friday, April 17, 2009

May Hughes in action in the Mary McKenna Trophy

The leading senior women golfers in Scotland and Ireland will be in action at Cruden Bay this weekend in the annual match for the Mary McKenna Salver.
The 2008 West Vets Champion May Hughes is in the Scottish Team and we wish her and the team every success
Mary McKenna, eight times Irish champion who played in nine successive Curtis Cup matches and is the current Great Britain & Ireland team captain, is just one member of a very strong Irish team of over-50 year olds.
The Scots, captained by home-course player Lynne Terry, are bidding for a hat-trick of victories having won the match in 2007 and 2008. The Irish have not won the trophy since the first three years of the competition - 2000, 2001 and 2002 - but with the players who have made the trip to the classic Cruden Bay links - where Ireland won the women's home internationals title in 1980 and 2003, they will start slight favourites to take the salver back to the Emerald Isle.
Play starts at 11am on Saturday (four-balls) and Sunday (singles).
Teams:
SCOTLAND
Heather Anderson (Northern), Lorna Bennett (Midlands), Fiona De Vries (Midlands), Jill Harrison (Northern), May Hughes (West), Fiona Hunter (East), Mary Smith (Highland), Kathleen Sutherland (Northern). Captain: Lynne Terry (Northern).
IRELAND
Valerie Hassett (Ennis), Marilyn Henderson (West Rhine), Helen Jones (Strabane), Mary Madden (Ballinasloe), Violet McBride (Belvoir Park), Sheena McElroy (Grange), Mary McKenna (Donabate), Pauline Walsh (Headford). Captain: Roma English (Larne).
Posted by Carol at Friday, April 17, 2009

Email ThisBlogThis!Share to TwitterShare to FacebookShare to Pinterest
Labels: May Hughes

Your Webmaster was on Radio Scotland 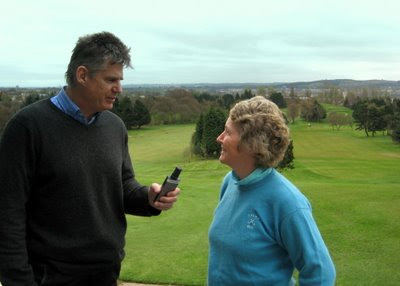 Carol Fell was interviewed by John Beattie at the Wets Vets Spring Meeting at Sandyhills Golf Club. Along with Scottish Golf Development Manager Andy Salmon of the SGU they were asked questions about Centralised Handicapping, the Counties Centenary Year, Womens Golf and the Scottish Golf Awareness week which is on this week (13th - 20th April 2009).
The interview was on BBC Radio Scotland on the 11th April ---
Please let it be noted that I did not set up the Centralised Handicapping System --- I was only a part of a technical group looking at it. Andy Salmon of the SGU is the main person involved

As part of the Golf Awareness Week campaign, the Scottish Golf Union has compiled a list of eighteen compelling reasons why you should join a golf club.

Email ThisBlogThis!Share to TwitterShare to FacebookShare to Pinterest
Labels: sgu

Happy Easter to all our Readers 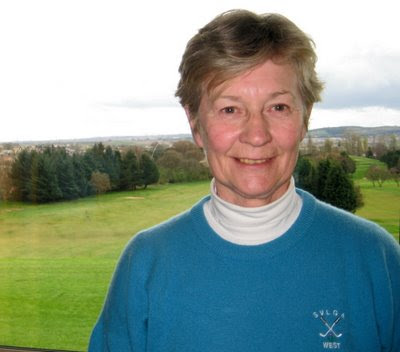 A very strong wind, a long playing course, and slow greens at SANDYHILLS GOLF COURSE exhausted but did nothing to dampen the enthusiasm of the fifty one ladies who took part in the West Vets Spring Meeting today which was also the qualifier for the 2009 Divisional Championship.
Captain Helen Faulds (pictured above) had the best round of the day with an 83 in the difficult conditions

Results: Entries 51, SSS 74, CSS 77 Reduction Only, -- PLEASE NOTE THIS IS THE CORRECT SSS AND CSS -- There was an error on yesterday's download to Masterscoreboard -- Click on the links below for all the results and your handicap exchange letter

Sorry to hear Constance has had a setback after her hip operation. We all hope that she is out of hospital soon and makes a quick and full recovery.
Posted by Helen at Tuesday, April 07, 2009

The draw for the Spring Meeting at Sandyhills GC on Thursday 9th April 2009 has been done. There are 78 entries starting at 9.30am.
To see the starting times Click Here
Posted by Helen at Wednesday, April 01, 2009