Congratulations go to Pat Hutton (Lanark)who won the Patrick Rose Bowl, held at the Rosemount Course on Monday, 24th September 2007
See the Scottish Vets Website
For all the other results when available go to The SVLGA Website
Posted by Carol at Wednesday, September 26, 2007 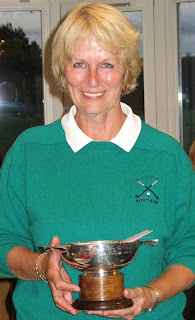 North champion Heather Anderson (Downfield) pictured above is the new Scottish Veteran Ladies Golf Association champion. In the tightest of finals over the Blairgowrie Rosemount course today (Monday), Heather beat Christine McAndrew (Nairn Dunbar), the Highland veteran women's title-holder, by one hole.
Heather was never in arrears but, at the same time, she was never more than a hole up. Christine got a birdie 2 at the ninth to square the contest but Heather regained her lead at the next hole.
Christine drew level again with a concesssion at the 13th. Heather went ahead for the last time at the 16th before two halves ended a enthralling contest.

Downfield’s Heather Anderson, the North area champion, knocked out Midlands title-holder Lorna Bennett from Ladybank by one hole in the quarter-finals of the Scottish Veteran Ladies Golf Association championship at Blairgowrie today.
Lorna is a member of the Scotland team for the Senior Women’s Home Internationals at Royal Tara, Ireland from October 2 to 4.
West champion Helen Faulds (Douglas Park) is also in that team and she was in good form in reaching the semi-finals at Blairgowrie with a 6 and 4 win over former champion Liz Campbell (Torwoodlee), the Borders title-holder.
Christine McAndrew (Nairn Dunbar), the Highland champion, also played well to win by 4 and 2 against Ruth Brown (Lothianburn), the East title-holder.
Jean Brydson (Galloway) won at the 21st hole in her quarter-final against Pearl Beattie (Dumfries-shire).

The semi-final line-up on Monday morning is:
9am Anderson v Brydson.
9.10 McAndrew v Faulds.
Final will tee off at 1.30pm. 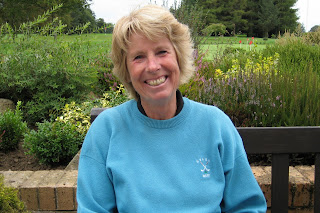 Also here are your handicap exchange letters ----click on the link and use the arrows at the top to work through and find your home club Handicap Exchange Letters
Posted by Carol at Thursday, September 13, 2007

The forecast looks good so we hope there will be a fine turnout at Strathaven for the Vets' Autumn Meeting on Thursday 13th September Remember that the running ballot will not begin until 11.30 AM.
Looking forward to seeing you all there
Good Luck
Posted by Carol at Tuesday, September 11, 2007

The Team for the Senior Ladies' Home International Matches to be played at Royal Tara Golf Club, 2 to 4 October is:-

Some Photos and Video from the Scottish Seniors at Glenbervie


Here is a wee video from the Social Evening Entertainmen.t Make sure your sound is turned on --- Sorry Broadband users only.