The team to play East on Thursday 1st June at Mortonhall for the Elise Duncan Trophy is as follows :-

The reserves will be :-

Many thanks to all who wished to be considered, and we are very grateful to those who are giving of their time to represent the West Vets.

The team to play Midlands on Monday 22nd May at Auchterarder for the Mid West Trophy is as follows :-

Many thanks to all those who were willing to be considered – your support is much appreciated.

The Scottish Veteran Ladies Golf Association team beat the Irish senior women's team 6.5 to 5.5 at Murcar Links Golf Club today to win the Mary McKenna Trophy for the first time since 2009.
Scotland took a 1pt lead in the first-day foursomes and just managed to hold on to that advantage by drawing the singles 4-4.
The Irish had won the last seven years in this fixture in which the venue alternates between Scotland and Ireland.
The vital Scottish victories in the singles came from Lorna McKinlay (Midland), Gillian Kyle (West) and Aberdeen Ladies stalwart Sheena Wood (Northern).
Donna Jackson (West) and Buckpool's Meg Seivwright (Highland) halved their singles.
It must be the North-east air that inspires the Scots Vets. The 2009 victory was achieved at Cruden Bay!

Scottish Vets win on Day One of the Mary McKenna Trophy


Scottish Vets lead the Irish Seniors team, current European Champions, by 2.5 to 1.5 after the first day's Foursomes at Murcar today.  Eight singles will be played tomorrow.

QUOTE FROM WEST VETS CAPTAIN JUNE LOCKHART --- Just to say that even though they lost, Lesley had an eagle at the par 5 4th hole.

Donna and Gillian dovetailed well and had a few birdies.

SPRING MEETING OVER EAST KILBRIDE -- HARD TO TAME THE COURSE AND THE WIND !! 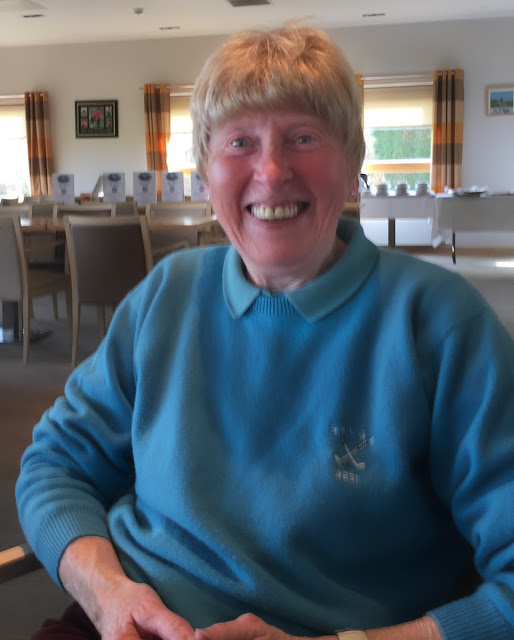 It was great to have 82 ladies testing their early season skills at East Kilbride on a dry but very windy day. The conditions contrived to lengthen some holes on an already long course !!

However some Vets deserve praise for managing to almost tame the course.
In particular, Dorothy Horsefield (Crail)  was the overall winner with an excellent nett 73, with runner-up Lilias Snodgrass (Ranfurly Castle) achieving a nett 75 (bih), and Sara Scott (Troon Ladies) was 1st in the Bronze Division with a nett 78.

Lilias Snodgrass (Net 75) also was the Super Vet winner  with Lana MacDonald (Hilton Park) one shot behind. with a net 76.  The best gross score of the day was achieved by Liz Stewart (Greenburn) with 79.

Despite the difficult conditions, everyone seemed to come off the course with a smile – or was it just relief !!
However we look forward to having a big field for our Summer Meeting at Ralston. Thanks go to Marion Stewart and Anne Dunn for their work throughout the day.

CHANGE TO IRISH VETS TEAM TO PLAY THE SCOTTISH VETS

There has been one change in the Irish Team to play the Scottish Vets next weekend. Gertie MacMullen is now not available to travel