Scotland, with a total of 423, were lying fifth behind Ireland (410), Sweden (412), England (415) and Spain (420) at the end of the first qualifying round in the European Senior Women’s Amateur Team Championship at Dun Laoghaire Golf Club, Ireland today (Monday).
CLICK HERE FOR THE FULL REPORT
Noreen Fenton from the East Vets also has a very good article about the Scottish Team
Posted by Carol at Monday, August 31, 2009 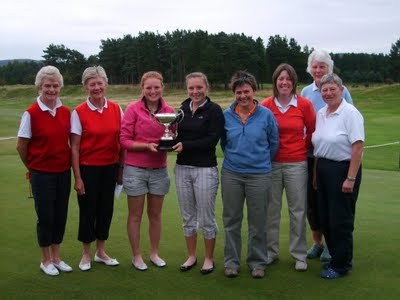 Captain Helen is a Winner Again !!!

West Vets Captain Helen Faulds won the D&A Autumn Meeting on Tuesday 25th August. To read all the results go to the West of Scotland Website
Posted by Carol at Thursday, August 27, 2009 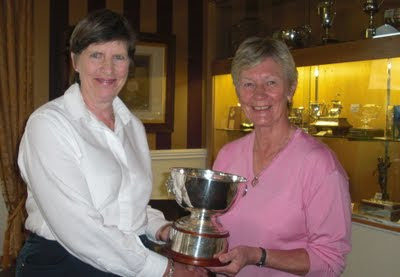 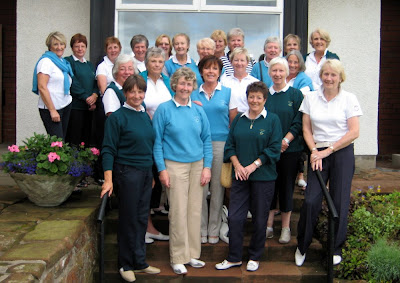 The West Vets played their annual foursomes match to-day against the East over Troon Portland. This match has been taking place for over 30 years. Noting the lack of something to play for, the ASP Trophy (Amicitia Semper Palma - Friendship Always the Prize) was kindly donated , a few years ago, by Asp Robertson from the East.
Between 9 and 10am this morning the weather was anything but good. However by the time we all met for coffee at 10, the views over Royal Troon to Arran were improving by the minute, and by tee off time at 11, the sun was beginning to shine and we enjoyed a lovely windless day! The matches were closely contested and the result was honours even - 2.5 : 2.5. The West having won last year at Gullane retain the Trophy for the coming year.
Our thanks go to Royal Troon for the courtesy of the course and to the staff at The Ladies Club for looking after us so well. A lovely day was had by all and we look forward to next year's match in the East.
Match Results: West players 1st
C Fell and E Grant halved with C Bowe and S Cullen
E Young and N McCrossin beat M McRobb and K Johnstone
R Henderson and J Graham lost to C McLeod and C Ross
S Gilchrist and E Dewar beat G Glen and E Cackett
J Halley and J H Stobie lost to C Kinnaird and J Wake

TO SEE THE ACTION PHOTOGRAPHS TAKEN BY EAST VETS VICE CAPTAIN NOREEN FENTON CLICK HERE -- THEN HIT THE PLAY ARROW TO MOVE THROUGH THE SLIDESHOW--- THANKS NOREEN
Posted by Fiona at Monday, August 10, 2009

Hi--THIS IS YOUR CAPTAIN REPORTING --- just back from Bath Golf Club where we managed to retain the Miller Stirling Salver in The Inter Area Jamboree. We had a great time despite the weather threatening to cause chaos.

Good luck to Vice Captain Fiona and her team who play their East counterparts at Troon Portland on Monday.

I am sure they will be successful.
Cheers Helen Faulds

2 years ago the match was played at Troon -- West were the winners on that occasion -- Click on the following link for the result and some photos on that day --- 2007 West v East Match
Posted by Helen at Friday, August 07, 2009 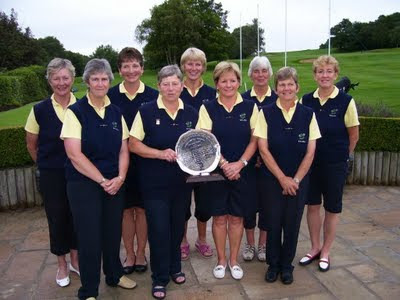 Scotland took another step towards retaining the Miller Stirling Trophy when they made it two match wins out of two by beating England Midlands 5-3 at the Veteran Ladies Golf Association Jamboree at Bath Golf Club.
Overnight rain made the greens unplayable until the afternoon. The match was decided on a singles only basis.
The Scots’ tail wagged to pull them through to victory after England Midlands established lead with success at the top of the batting order.
Lorna Bennett was won down on the 18th tee but won the last hole to save half a point in her match against Jo Ashmore.
Mary Smith was two down with three to polay but won the 16th and 17th from Julie Walters and halved the lost for another half-point salvaged.West Vets Captain Helen Faulds was all square for much of the match against Angela Dawson and stayed that way even after going out of bounds at the 17th. She sank a long putt to halve the hole and then kept her nerve to win the 18th for the match.
In the other match, England North beat England South 6-2.
Details:

Thanks go to Colin Farquharson for the report
Posted by Carol at Wednesday, August 05, 2009