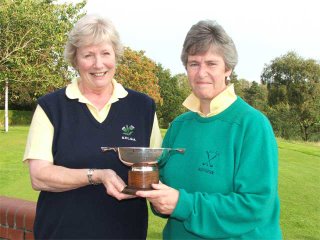 Helen Faulds the West Division champion put up a good fight in the semi finals of the Scottish Veteran Women's Championship today against the North area over-50s title-holder Kathleen Sutherland (Royal Montrose). However, she eventually lost 2 and 1 to Kathleen.
Kathleen (pictured above with SVLGA President Dawn Moor) then produced an inspired spell of putting in the final to win the championship over the Lansdowne course at sunny Blairgowrie.
Kathleen beat Noreen Fenton (Merchants of Edinburgh) by 4 and 3 in the final after holing single putts on the last five greens, two of them for birdies, at the 12th and 14th.
Noreen is in the SLGA-selected Scotland team for the senior women's home internationals at Hamilton Golf Club next midweek as is Helen. Kathleen is a reserve. 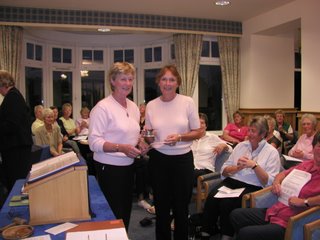 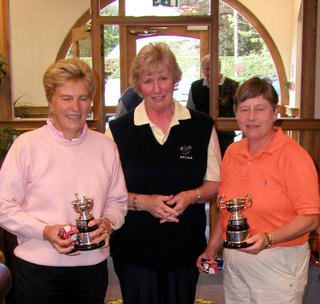 Prize List from Blairgowrie ---- Thanks go to Captain of the Scottish Vets -- Pat Hutton for the list of all prizewinners ----------
Many congratulations also go to Pat Hutton who won the SVLGA Foursomes Trophy with Lynne Terry (North) and Helen Faulds who won the Kennaway Trophy
Posted by Carol at Tuesday, September 26, 2006