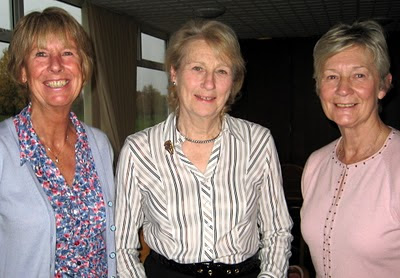 The AGM of the West Vets was held today -Thursday 4th November- at Cowglen GC.
Fiona Rogers (Ranfurly Castle) was appointed Captain of the West Vets taking over from Helen Faulds (Douglas Park)


When appointed to office -- Fiona then gave her speech:

They say the older you get, the faster times goes by. For a long time I always thought that was such a daft thing to say. I now believe it is absolutely true. I stand here as your new captain of the west division of the slvga, my two years as vice captain having passed in the blink of an eye, following in the footsteps of many excellent captains and hope that I can maintain their high standards.

It is also nice to know that over the last few years I have got to know many of the vets in the other divisions in scotland, and I am so glad that Emma Wilson, Midlands captain and Noreen Fenton, East captain - both areas we have our matches against - I would like to think of as ‘chums’. It brings the divisions closer and we can compare notes and feed off each other.

Helen, you have completed your 2 years of captaincy and have put a lot of time and effort into making sure that our vet’s west division has run smoothly and efficiently, and on behalf of us all, thank you for always doing this with a smile on your face. A job well done.

I have enjoyed working with you and have been treated to lunches and coffees while we have attended to ‘affairs of state.’ you have always been in control of situations even on the very few times that problems may have arisen. I am delighted that you are remaining on committee for the incoming year and I will welcome your help and advice at any time.

I would lastly like to say how well Helen has represented the west division as part of many seniors and vets teams over a number of years. winning the west vet’s championship on several occasions, going on to Blairgowrie to battle for Scottish Vet’s Champion unfortunately eluding her so far. Helen has played in several scottish vet’s teams at the annual jamboree and for the scottish team against Ireland for the Mary Mckenna trophy. A very impressive vets golfer’s cv. May I wish her success in her new role as Vice Captain of the Scottish Vet’s Team currently captained by Pam Williamson.

Election of office bearers for the coming season

I have great pleasure in proposing, as my Vice-Captain - Anna Telfer

With our current life styles it is never easy to persuade people to take on extra commitments, and I was so pleased when I asked Anna some months ago to be my vice captain, that she accepted. I telephoned her earlier this week to up date her on one or two things, and when she heard my voice, she asked me if I was just phoning to make sure that she was still happy to take up her position!!!
I know in Anna, a past club captain at Milngavie and a D & A County Captain, I have a wealth of knowledge backing me up. Not only that but Anna is always to the fore on the golf course, setting herself high standards and achieving them. I am in fact sandwitched between exceptionally good golfers - Helen and Anna - we have spent many fun times away playing in seniors events both home and abroad.

Anna doesn’t have to many free hours in her days, with golf, bridge, grandchildren and many other interests but I know that she will be a great asset to the west division of the SVLGA and I look forward to working with her over the next 2 years.

To the rest of the committee:

Helen: as Past Captain remains on committee for one more year.

I would like to propose that Ruth Henderson ( Williamwood) and Sheila Shaw (Lochwinnoch), as secretary and treasurer, having both agreed, continue in their positions.

Maureen Mitchell took Sheila’s position on committee when Sheila became treasurer, and as Helen has said, she now stands down after 2 years on committee. Janice Paterson (Drumpellier) and Moira Camerson (Whitecraigs) also stand down after 2 years. We feel, as a committee, that we do not require to have more than 6 members of committe and hope you will support our decision not to replace those standing down. It may not prove successful, in which case we would reconsider our decision next year, but the following people will be your committee for 2011:

I hope you continue to enjoy your time on Committee and I look forward to working alongside you all. 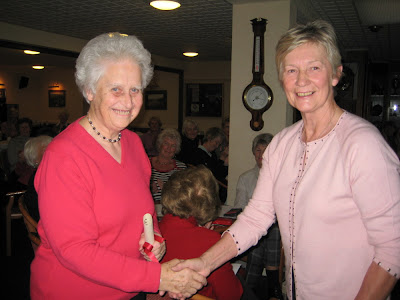 Wendy is presented with her Honorary Membership
One of the highlights at the AGM was that the committee were delighted to announce that they have asked Wendy Cameron to become an Honorary Member of the West Vets Association and even more importantly, she has accepted.
In Helen Fauld's Speech she stated ---
Wendy has over many years given a huge amount to both the West and Scottish Vets and indeed Scottish Ladies golf.
She has been West Vets Captain, Scottish Vets Captain and President and played in the Scottish Vets team.
She has also been a Renfrewshire Team member, Captain, President and Hon Member of the County.
In terms of SLGA, Wendy has been Chairman, President and is also a Vice President of the Association, one I may say of a very select few.
At club level she is a Life Member of Eastwood GC.
I think you would agree it’s a fantastic record both in levels of time and commitment and obviously someone who is held in high regard by so many people.
Wendy, we are delighted you have agreed to becoming an Honorary Member and you join an illustrious group of ladies ---
1974 -- Mrs Jean McCulloch, Mrs May Menzies, Lady McInnes Shaw, Mrs Craddock Mrs Chips Robb.
1982 -- Miss Betty Hendry and Miss Madge Bell
On behalf of all the West Vets I have great pleasure in presenting you with this scroll to mark the occasion.

CLICK HERE to get the minutes from AGM
Posted by Helen at Thursday, November 04, 2010