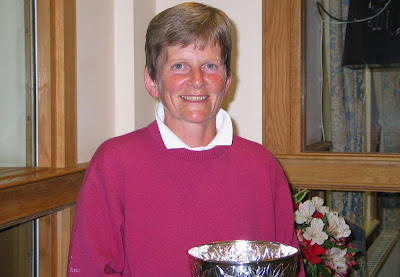 Lorna Bennett - 2009 Scottish Vets Champion - Click to enlarge
Fife's Lorna Bennett (Ladybank) won the Scottish Veteran Championship for the second time, the first being in 2004. She beat Moira Thomson (East) at the 19th today over the Landsdowne Course at Blairgowrie this afternoon.
In the morning's semi finals Lorna played Sheila Cuthbertson of Peebles and won by 4 and 3 and in the other half, Moira Thomson played Lynne Terry and and won 5/4.
To read a full report by Noreen Fenton go to the East Vets Website
Posted by Carol at Monday, September 21, 2009