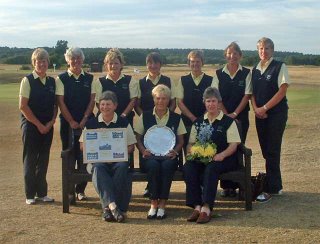 Scotland won the Veteran Ladies Golf Association’s area team championship for the Miller Stirling Trophy at Formby Golf Club today.
The team, captained by Pat Hutton (Lanark and SVLGA -- West Division), clinched the title with a sweeping 7-2 win over North of England, last year’s winners. The victory completed a three wins out of three record over the three days for Scotland.
The Scots had one hand on the trophy when they made a 3-0 clean sweep of the morning foursomes and took the singles 4-2 with wins by Lorna Bennett (Ladybank), Kathleen Sutherland (Royal Montrose) and Pamela Williamson (Baberton) plus halved matches involving Moira Thomson (North Berwick) and Fiona De Vries (St Rule).
“It was a wonderful team to captain with such strength in depth,” said Pat